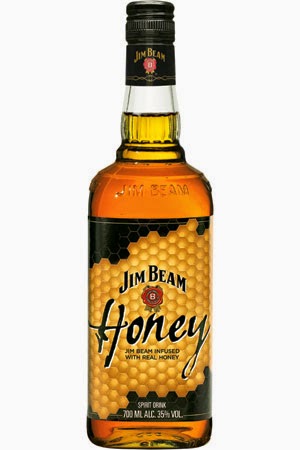 Jim Beam Bourbon is one the best Bourbons that are available.

It comes all the way from Kentucky and is an ideal drink for the Christmas season, bringing the warming tastes of the best of American summers.

It's great by itself, on the rocks or as the basis for many good cocktails.

My wife and I enjoyed it with some home-made cinnamon sugar, which was perfect.

But then came some Jim Beam's Devil's Cut 90 Proof Bourbon.

It has a heady, woody taste to it that has echoes of it's brother bourbon, but which takes you on a journey through a variety of spices and flavours.

You have to sip it, really sip it. Because it really is that good.

Amidst the bourbons we found our bottle of Courvoisier Cognac.

Wow! What can I say? We were, once again, blown away by this cognac. If creating this drink was all that France was known for, it would be enough to earn France its place in the sun.

Delicious and an ideal companion for Christmas, sat by the flickering fire, eating mince pies and sipping Courvoisier. Charming and enchanting.

Yes, that's so! My wife is not, it has to be said, all that keen on Scotch. But she nodded in bliss, smiled and said: "That hits the spot!"

We then moved on to a bottle of Licor 43, or Cuarenta Y. An ideal friend of the cocktail maker, this Spanish liqueur is a combination of fruit juices and 43 different herbs and spices, hence the 43 in the name.

You can taste vanilla and the warming Spanish sun. It's a thick, sweet golden liqueur, we mixed it with ginger ale and were pleasantly impressed with the result.

We next worked with some Jim Beam Red Stag, which was flavoured with black cherry. Some products that are cherry flavoured taste a bit like bubble gum, but red Stag with Black Cherry is pure cherry, through-and-through. Along with the wonderful taste of Jim, Beam, of course!

Were we flagging? Not a bit of it! Next we tried some Jim Beam with Honey and marvelled anew at the bourbon maker's artistry in creating yet another wonderful drink, so suited to Christmas and the New Year.
Posted by Martin S at 14:33

That's Christmas and its Team of Testers would like to thank the PR folks & independent suppliers of food and drink products and Christmas gifts who assist us in testing products for That's Christmas by providing items, gratis.
Got a product that you'd like featured here, for free? Please email thatschristmas@mail.com.