The Philips RQ1100 Series Sensotouch 2D dry/wet razor makes an excellent Christmas (or birthday) present for the shaver in your life.

One morning when we were on our way out my wife asked me why I had neglected to have a shave. I told her that I had shaved and she touched my stubbled face and said: "It's time you got a new razor!"

My razor was a Panasonic wet/dry razor which was about 18 months old and which could no longer cut the mustard, or my beard, sad to say.

So I bought a safety razor which, with the number of nicks and gouges on my face that I managed to inflict upon myself, plus the large amounts of random bits of toilet tissue I had to plaster my face with in a sometimes vein (sic) attempt to stem the sometimes copious flow of blood before I departed for the office, I realised that the term "safety" in this context was a somewhat relative term.

Eventually my wife's patience (which to be fair is never exactly plentiful!) ran out and she said: "That's enough! It's time we got you a new electric razor! I'm not having you leaving this house covered in blood and bits of toilet paper!"

And so we visited a large branch of boots and eventually selected a Philips RQ1100 series Sensortouch 2D razor kit which was available at a slightly discounted price.

After following the instructions for setting the razor up (initial charge, etc) I had my first shave with it.

The joy of having a shave that produced the smoothness of a safety razor shave without needing to reach for large amounts of toilet tissue cannot be underestimated.

Basic cleaning it is easy, the interchangeable head is easy to clean with some water and the provided brush.

It also comes complete with a special high tech jet clean module that is electrically powered and which uses a bottle of -provided- jet clean solution. (Which has a pleasant scent.)

Although the razor comes with a user manual with pictograms I was only fully able to understand how to use the jet stream cleaning module that comes with the razor by watching an instructional video that I was able to find on Youtube. There are also other videos that are useful as they provide some excellent hints and tips on cleaning and using the razor to its best advantage.

Although it can be used wet or dry (shaving in the shower is on suggestion) I have only ever used it "dry" so far.

The full list price is £160, but can be bought for a substantial discount on Amazon for about £124 and may still be available on sale terms in Chemists such as Boots. Those making their purchase in Boots will also receive points, if they have an Advantage card.

In closing, this razor makes an excellent Christmas or birthday present for someone who is important in your life.

And they'll probably get the best dry shave they've ever had!
Posted by Martin S at 14:35 No comments:

A recipe for homemade Mince Pies by Fiona Burrell 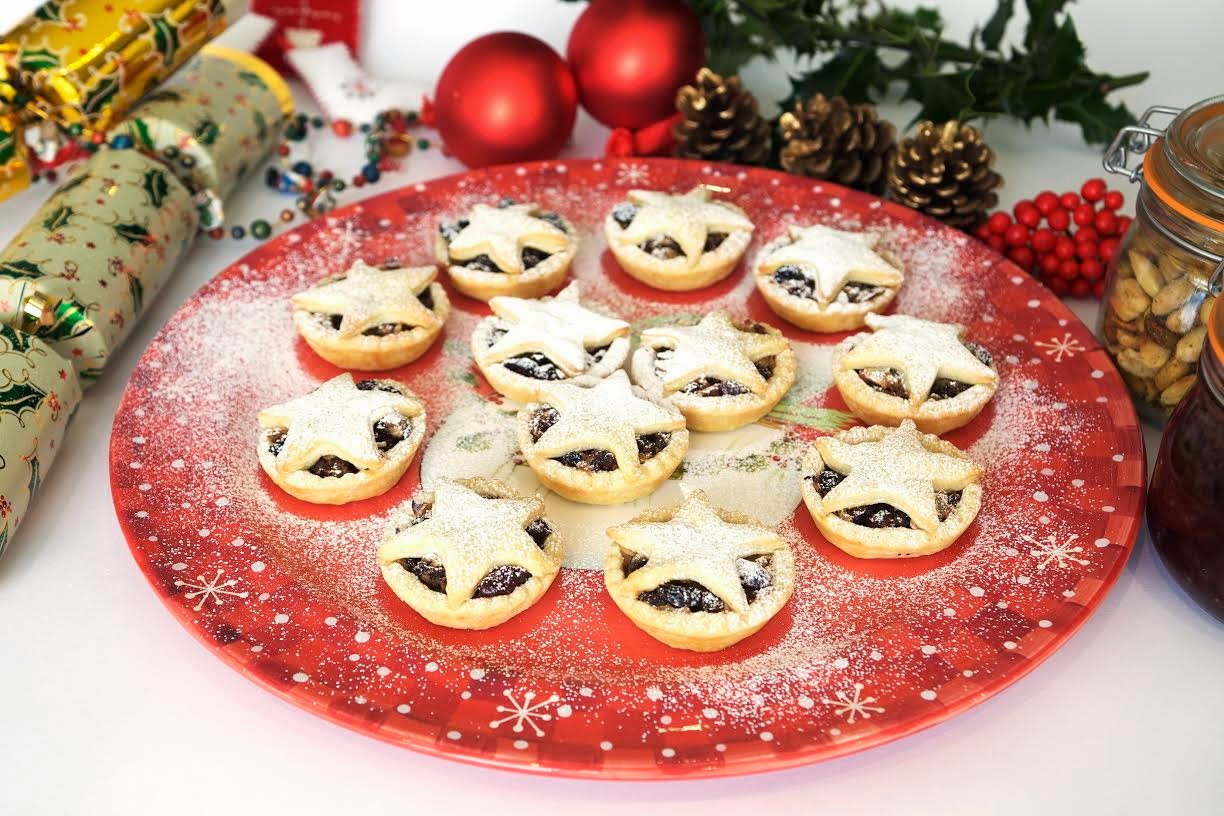 The recipe was developed by Fiona Burrell, principal of The Edinburgh New Town Cookery School (http://www.entcs.co.uk/about-entcs).

Fiona is an expert in life skills cookery and she contributed to numerous publications including Leith Baking Bible, Leiths Vegetarian Bible, Leith Book of Cakes, Leiths Cookery Bible and Leiths Complete Christmas. In 2009 she opened doors of The Edinburgh New Town Cookery School; the school offers professionals and amateurs the opportunity to study a number of courses including three-month certificate and sex-month diploma courses, as well as short themed courses.

Fiona comments on this recipe “Homemade mincemeat is absolutely delicious and this version is very quick and simple to make. The mincemeat and pastry recipe can also be used to make a large tart, which works very well as a Christmas dessert served with ginger ice cream or brandy flavoured crème anglaise.”

Make the pastry by sifting the flour into a large bowl. Add the butter and salt and rub in until it resembles coarse breadcrumbs.  Add approximately 5 tablespoons of ice cold water. Bring together to a ball of dough adding a little more water if necessary. Flatten into a circle and wrap in cling film. Chill for 15-20 minutes.

Wash and grate the apple, including the skin. Put into a bowl and add the sultanas, raisins, cranberries, almonds, lemon zest, orange zest, mixed spice, whisky and melted butter. Mash the banana and add to the mincemeat.

Preheat the oven to 190˚C/Fan oven 170˚C/gas mark 5.
Bake in the centre of the preheated oven for 15-20.
Cool slightly and remove carefully from the tin. Dust with icing sugar just before serving.

(That's Christmas acknowledges the invaluable help of Fiona Burrell and Svetlana Hirst in bringing this recipe to the readers of That's Christmas.)
Posted by Martin S at 20:44 No comments: 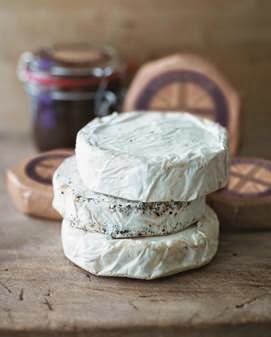 To provide the quintessential British Christmas for your family and friends, then you need some Godminster in your festive plans.

Treat them all (and yourself too, of course!)  to some truly delicious handmade organic British Brie from Godminster.

Godminster is based near Bruton, Somerset cheesemaker.

They  produce three types of creamy, organic Bries. They come as traditional, hand-rolled in crushed peppercorns and infused with garlic and chives.

Each individual cheese is lovingly created over a seven day period using only the ancient, traditional methods.

And for those who are concerned about such things, the Godminster milk is ‘set’ using vegetarian rennet.

The soft curds are hand-cut before being placed in individual moulds, which are, of course,  hand-turned.

Finally the Bries are taken into the drying rooms for just under a week, allowing them to have a bit of a rest, as the delicious flavour and creamy textures develop. And to cap it all, they are properly hand wrapped, too.

The Bries will be available this Christmas online (www.godminster.com) as the Godminster Organic Brie Gift Selection priced at £18.50 including postage and packing.

Perhaps you don't like brie, or want to provide even more festive merriment for your cheese lovers this Christmas? Then why not buy some of the other very special cheeses from the Godminster Heart Cheese Selection, too?

This gift selection is priced at £23.95 including postage and packing and is will also be available online from www.godminster.com.

And there are other Christmas gifts available from Godminster, like the Bloody Mary Gift Pack £32 incl. P&P, The Classic Port £90 incl. p&p, The Heart Party Pack £32.95 incl. p&p,  or the Godminster Vintage Organic 400g or the Heart and Fruit Cake £26 incl. p&p.

The George pub in Frant, East Sussex will yet again host the Sloe Gin World Championships on Wednesday 10th December from 1.00pm onwards.

Craftsmen and women from all over the world will meet at The George to vie for the undoubted honour of being declared Sloe Ginster World Champion of 2014.

Christmas 2014 marks the sixth year of this highly successful event.

Why did it all start? Regulars in the pub had started to debate the best traditional sloe gin recipe.

The pub dates back to the early 1750s, and it’s still the quintessential traditional English pub with hand pulled beers and home cooked food.

So, for the uninitiated, what exactly is Sloe gin?

It is a gorgeously hued red liqueur flavoured with sloe (blackthorn) drupes. It’s related to the plum, though somewhat smaller in size.

It’s normally produced by placing the drupes in ordinary gin and allowing the sloe juices to transmigrate into the gin.

Although commercially made sloe gins are available and taste pretty good, in general, you really can’t beat a good bit of hand crafted sloe gin.

Sloe gin is made from ripe sloes, which traditionally must be picked only after the first of the winter frosts.

The drupes must be hand pricked with a thorn taken from the blackthorn bush on which it grew. Some purists argue that if a metal fork or pin is employed, then it must be only one made of real silver.

All proceeds of the event will be donated to the MS Society which supports people with Multiple Sclerosis www.mssociety.org.uk.


How do I make Sloe Gin?

Fill the jar with gin, seal and turn several times to mix, then stored in a cool, dark place.

Turn every day for the first two weeks, then weekly, for at least three months. The gin develops a deep ruby colour.

The liqueur is poured off and the drupes removed. Some sloe ginsters reuse the berries infused in white wine or cider, made into jam, as a basis for a chutney, or a filling for liqueur pudding or chocolates.

The liqueur is then filtered into clean bottle or and left to stand for another week. The sweetness can be adjusted to taste at the end of the process by addition of more sugar.

Allowing the drupes sufficient time to ensure full extraction, the gin develops an almond-like essence and aromatic flavour from the sloes' stones.

In some recipes, the process is accelerated with the inclusion a few drops of almond essence, cloves and a cinnamon stick of cinnamon.

I am sorry to have to tell you this, but the fact is, Christmas is on the way!

In fact, it's just a little over four months away.

So, between now and December 25th, That's Christmas will be bringing you news of what new and traditional gifts are available for you and also what festive foods and drinks will be on the market for you to tempt and please your family members and dear friends and relations with.

There will also be some very interesting recipes for you to try out for yourself.

Please just bookmark this page, set it as a favourite and keep on coming back for more!
Posted by Martin S at 17:14 No comments:

That's Christmas and its Team of Testers would like to thank the PR folks & independent suppliers of food and drink products and Christmas gifts who assist us in testing products for That's Christmas by providing items, gratis.
Got a product that you'd like featured here, for free? Please contact us.