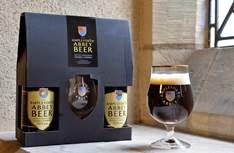 Ampleforth Abbey Beer is a traditional monastic beer which is based on a centuries-old Benedictine recipe adapted for use with modern brewing methods.

It was launched two years ago and is already on target to sell 100,000 bottles by Christmas.

And Ampleforth Abbey Beer was named ‘Yorkshire’s Best Drink’ in the Deliciously Yorkshire Awards in 2012/13. It also received the Two Star Great Taste Award and was awarded silver in the International Beer Challenge.

It is sold in around 70 specialist and independent retailers throughout Yorkshire, branches of Booths supermarket, in local pubs and restaurants, online and in the Abbey Shop.

So, what does it taste like? It's like a traditional Belgian Trappist beer, but it is so much more than that.

There's a hoppy earnestness about this beer. It is not for the lager fan, as it is 7%  and full of flavour.

There are hints of rum and also of a good old English pudding, too, but all delicately balanced.

It's not a quaffing ale and works very well as a accompaniment for your Christmas dinner, making an interesting replacement for the more traditional wines.

To buy your ale or one of the other most excellent products from the monetary please visit  http://www.visitors.ampleforth.org.uk/abbey-produce-2.

That's Christmas and its Team of Testers would like to thank the PR folks & independent suppliers of food and drink products and Christmas gifts who assist us in testing products for That's Christmas by providing items, gratis.
Got a product that you'd like featured here, for free? Please email thatschristmas@mail.com.